Sheryl Roush has written a series of books filled with heartwarming and inspiring stories. Sparkle Presentations, Inc.,  Sparkle Press, and WorldSound Productions have joined hearts and efforts to create a MUSIC AUDIO CD to accompany Sheryl's book, HEART OF A MOTHER. Truly a unique and diverse collection, nine well-known musicians have lovingly contributed their gifts in memory and tribute to the life of Laurie Z.®. Also included on the CD are two songs by Laurie Z., FOR THE LOVE OF A CHILD and ALL THE LOVE IN THE WORLD. 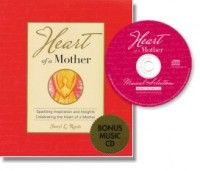 HEART OF A MOTHER is a gift book filled with touching tributes to Mothers and Grandmothers, inspirational short stories, poems, proverbs and quotations. A perfect gift for Mom: from mother’s birthday to Mother’s Day, as an extra anniversary present, or any day a special thank you is in order. Great gift for new mothers and at baby showers... Give her something for her!

HEART OF A MOTHER MUSIC TALENTS:

Laurie Z.® received a total of 15 Grammy nomination considerations for her recordings. Her ability to gracefully mix classical, modern jazz and contemporary instrumental styles has been called “absolutely amazing” by prominent music critics and fans alike. Laurie was known for her in-concert improvisations and For the Love of a Child was first created in concert from a suggestion from the audience. It was later recorded live to Disklavier, without edits or overdubs. All The Love In The World by Laurie Z.®, is Sheryl Roush’s heartfelt pick.

Doug Sparling has written music for Pat Sajak’s Lucky Letters (Wheel of Fortune) cell phone game, recorded and written music for Kansas City Irish Rock band The Elders, and performed on the title theme for an indie film titled Hunter. His music has been placed in music production libraries in the U.S. and UK. Interested in many styles, Doug’s musical compositions include Celtic/Irish, solo piano, solo acoustic guitar, and ambient guitar and lap steel. Doug’s tune, The Old Stone Bridge was selected in 2005 for a McDonald’s web site benefiting the Ronald McDonald House and appears on Celtic Shores II (Epilogue Records) compilation CD. You will dance along to The Mother & Child Reel on this compilation.

Ericson Holt has recorded and toured with Grammy winners, The Mavericks, and Oscar nominee and critics favorite Allison Moorer. He has performed with Lee Roy Parnell, Rodney Crowell, Tracy Nelson, and Ricky Van Shelton. Ericson is featured prominently on the new Mike Farris release Salvation in Lights and is an in-demand session player in Nashville. Moonlight in Memphis is from Ericson’s debut solo album, The Blue Side, which climbed to the top 30 on the Americana Chart.

Steve Gibb is an award winning composer and guitarist. His amazing instrumental versatility, combined with his ability to compose in many styles, enables him to transcend the musical genres with ease. Steve has worked with many of today’s leading composers and is in much demand as a session guitarist. Steve has appeared on stage in the title role for the musical, The Buddy Holly Story and performed in the Tony Award winning Broadway musical Jersey Boys.  Steve’s Lost in You on this touching compilation is soothing, nurturing and passionate.

JanElaine is not what you might expect. When you first see her, you might expect the performance to match the pretty, petite, and gentle natured person. Then she sits at a piano and her powerhouse performances resonate the chords of your soul. Her songs are broad and sweeping and take hearts soaring, while also relaying a grace that leaves listeners with a sense of peace and well-being. Vocal to Turning Wheels is performed by the talented Joy Summerville.

Charlie Souza is the original Tom Petty band bass player. He was also the bass player for the pop/rock legend bands Fortress and The Tropics. Charlie has performed, collaborated and recorded with Bill Champlin (Chicago), Joe Walsh, Jim Horn, Greg Allman, Cactus, Santana keyboardist Leon Patillo, The Darrell Mansfield Christian Band, White Witch & Gale Force. Charlie has carved out a successful career as a session musician, writer, producer, band leader and, along with other members of The Tropics, is a recent nominee to the Florida Rock and Roll Hall of Fame.

Kirsten Vogelsang is both a composer and a professional cellist. Kirsten has taken her background and fluency in string and orchestral writing and applied it to new and crossover genres such as electroacoustic and trance. As a Sundance Fellow, Kirsten began her filmscoring career in 1990, scoring over 20 films and TV productions. As a session musician, her countless recording highlights in film and television include X Men, Star Trek, and The Last Samurai. Composing for the dance and concert music world, Kirsten’s performance list includes Carnegie Hall, Lincoln Center, and the Whitney Museum. Kirsten’s tender track on this CD is Mamas Know (Kyra’s Lullaby).

Peter Combe is indisputably Australia’s finest and most loved children’s songwriter and recording artist. His wonderfully diverse music delights both children and parents alike. With three ARIA Awards, the American equivalent of a Grammy, Peter was the first Children’s artist in Australia to ever receive an ARIA Award. Seven of Peter’s albums have received Gold Awards and two Platinum Awards. He has written songs for all of his four children with Child of Mine written for his daughter Alice. Daughter Emily Combe, provides background vocal, whose band, The Finishing School, is a recipient of the 2006 L.A. Music Award for “Best Pop Artist of the Year.”

Penka Kouneva is a Sundance Composer Fellow and Hollywood film composer blending her native Eastern-European influences with modern orchestra, Medieval chant, rock, and electronica. She has scored numerous independent features, television films for the SciFi channel, episodic shows on cable TV, and documentaries. In addition to scoring, Penka is a busy orchestrator on studio films (Pirates of the Carribean III, Matrix 2 & 3, Lizzie McGuire Movie), and on film trailers for the two biggest trailer houses in Los Angeles. Playground was written in tribute to the memory of Laurie Z.®

WorldSound Productions and Sparkle Press graciously thank all the Artists for their generous heartfelt contributions to this CD which is dedicated to the memory of Laurie Z.® 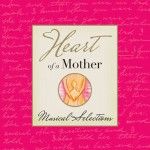 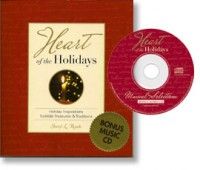 Bask in the glow of winter’s warmth. Celebrate the most blessed time of year with lighthearted tales, original stories and poems, and quotations… all wrapped up and ready for you to open and enjoy. Whatever your faith or celebration, Heart of the Holidays evokes the spirit of the season and gives the gift of joy and peace. 240 pages

ABOUT THE MUSIC ON HEART OF THE HOLIDAYS

1. The Heart of the Holidays (3:55) (Laurie Z.) - Written and performed by Laurie Z. This is a modern, orchestral/symphonic composition that easily holds its own next to the Christmas songs we all know by heart ... Strings & synth sounds underscore a light keyboard sound.

5. Warmth From Within (3:00) (Laurie Z.) - "Warmth From Within" is a modern original composition, celebrating the spirit of the season and capable of calling to mind feelings and memories of holidays past. Written and performed by Laurie Z., the song was inspired by the oil painting by wildlife impressionist Jesse Anderson and portrayed in the cover art of the original CD.

7. Sivivon (3:08) (Trad. Arr. Laurie Z.) - This is a modern and warm interpretation of the traditional Chanukah song.  Sivivon (S'veevon) is the Hebrew word for "Dreydel" (meaning "to turn"). Beautiful and deeply felt, solo piano is underscored with strings & synth sounds.

The book itself has six chapters: “Thanksgiving,” “Christmas,” “Yuletide Around the Globe,” “Hanukkah,” “Winter Solstice,” and “Ringing In the New Year.” The majority of essays, poems, and quotes come from American women, but there are thoughts and ideas from men and women from around the world, several different cultures, and various faiths. Some of the stories about the holidays are fairly commonly-shared experiences while others are deeply personal. Some are funny and some are heartwarming, but all were selected to share and uplift the true spirit of these various holidays and celebrations. A few writers shared interesting traditions from their own families that could prove meaningful to others. I especially liked one parent’s suggestion that before  any gifts can be opened on Christmas, the recipient is required to express something he or she is grateful for. Sometimes these kinds of books can be a bit too sugarcoated, but I really enjoyed this one, and it got me thinking about the memorable Christmases of my own life.

The accompanying CD contains eight selections: two of Laurie Z.’s originals, two Chanukah songs that Laurie arranged, her arrangements of “What Child Is This?” “Carol of the Bells,” a medley of “Deck the Halls” and “Angels We Have Heard On High,” and Jack Palance’s smile-making reading of “The Night Before Christmas.” It’s a wonderful sampler of Laurie’s music. (The full-length CD is still available at most online music outlets, and my review of the full album is at www.MainlyPiano.com.)